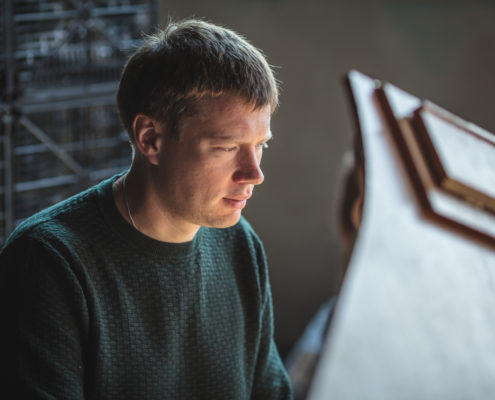 He is the author of chamber, symphonic, vocal-instrumental and choral musical compositions, numerous arrangements, instrumentations, transcriptions, orchestrations in various genres and styles, music for theater, films, special art and festival projects  Member of Belarusian Composers Union and The Belarusian Union of Musical Personalities  Teacher of The Belarusian State University of Culture and Arts

2008. Participant of the scholarship program of Polish government Gaude Polonia. Traineeship in composition at the The Karol Szymanowski Academy of Music in Katowice, Poland (creative tutor – prof. Aleksander Lason)

During the season 2016-2017 he collaborated with The State Chamber Orchestra of Belarus as a composer-in-residence.

In the field of applied music he collaborated with The Republican Theater of Belarusian Drama, film studio “Letapis” (“Belarusfilm”), Keepforest studio, Sechenov.com company. He is the composer for the II European Games in Minsk Opening Ceremony (show “When the Fern Blooms”).

Kanstantsin Yaskou is the author of more than 100 musical arrangements in various genres and styles. The central place in his creative activity occupy arrangements for symphonic orchestra of classical music, pop music, rock music and film music. There are lots of arrangements of musical folklore (Belarusian, Russian, Ukrainian) for vocal ensembles and choirs. As an arranger, he collaborated with The National Academic Bolshoi Opera and Ballet Theatre of the Republic of Belarus, Janka Kupala National Theatre, Belkontsert, Keepforest studio [http://keep-forest.com/], professional, amateur and educational orchestras, vocal ensembles, choirs.

Kanstantsin Yaskou has worked at The Belarusian State University of Culture and Arts at The Department of Belarusian Folk Art since 2008. He teaches disciplines related to the arrangement and musical transcription of Belarusian musical folklore and musical stylistics. From 2008 to 2017 he worked at The Belarusian State Academy of Music at the Department of Composition. He taught the analysis of musical forms, harmony, composition, computer technologies in composer’s creativity.

Kanstantsin Yaskou has a degree Ph.D. (specialty musical art). He defended the dissertation Polystylistics in a composer’s creativity (based on the material of the chamber instrumental works by Belarusian composers of the early 21st century). He is the author of 12 scientific articles about process of composer’s creativity and polystylistics. He participated in numerous international scientific conferences.

Kanstantsin Yaskou is an organizer and co-organizer of projects, concerts, festivals of contemporary music and contemporary art. He is a member of non-governmental organizations: The Belarusian Union of Musical Personalities (since 2001) and Belarusian Composers Union (since 2006). He constantlycooperates with Polish Institute in Minsk in the field of organizing and management of Polish-Belarusian musical art projects.